The Isuien Garden has been designated as a "place of scenic beauty" by the national government under the "Cultural Properties Protection Law." The garden in fact consists of two types of gardens designed in two different time periods.

One is the "Front Garden," designed as a Japanese style garden secluded from the outside world in the early Edo Period (seventeenth century). The other is the "Back Garden" designed in the Meiji Era (early twentieth century) where visitors can enjoy neighboring landscape in the background of the garden. 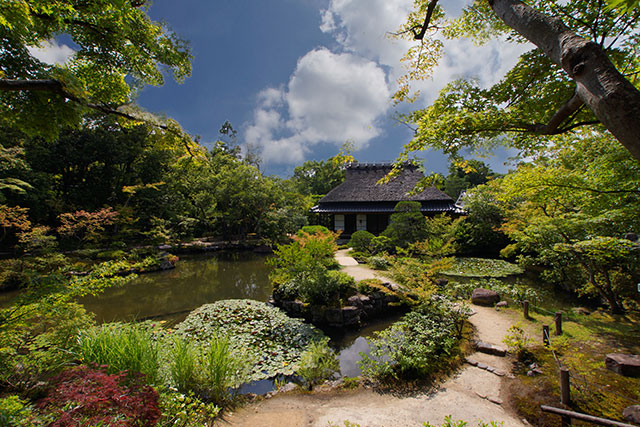 The Front Garden is one you see on your right as you go through the entrance to the garden. The Front Garden was designed in the 1670's (early Edo Period) by KIYOSUMI Dosei, a dealer of high-quality fabric called Nara-zarashi, who also held an appointment of the Tokugawa Shogunate. In order to enjoy Sencha,steeped green tea, KIYOSUMI transferred the Sanshutei Tea House, erected the Teishuken Tea House, and created a garden by the Yoshikigawa Stream, where guests can command a view of the Three Cherished Hills, Sanshu in the background. (Nara-zarashi is a locally-made high-quality fabric used for samurai's official attire during the Edo Period.)

In the middle of the pond is a small man-made island, modelled after a crane and turtle. Stone garden lanterns are placed at various points along the pond. Stone walls enclosing the pond are of a style typical of the Edo Period. From the Sanshutei Tea House where you can have a light meal, you can command a view of the Front Garden. The garden is so calm that you can hear water flowing. It is "the world of calmness" secluded from the outside world. 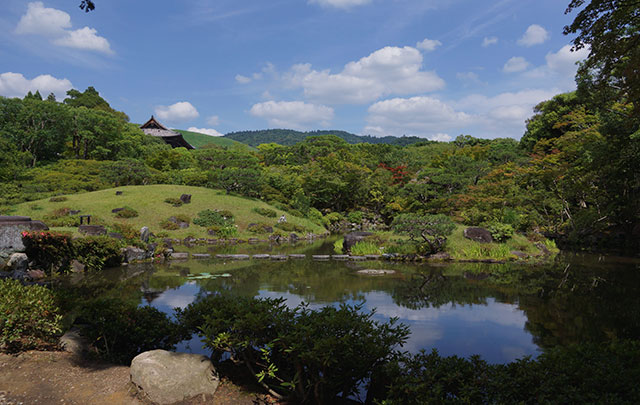 The Back Garden is featured by tsukiyama man-made small piles of earth and paths along the pond and over the tsukiyama. It was designed by SEKI Tojiro, a businessman in the Meiji Era (early twentieth century) in order to enjoy tea ceremony and gathering for composing poems.

Once guests go through a narrow path paved with stone slabs between the Teishuan and Seishuan Tea Houses, suddenly a very wide view opens. In the background are the Three Cherished Hills of Mikasayama, Wakakusayama, and Kasugaokuyama, as well as the Nandaimon Gate of the Todai-ji Temple. The view is so lavish that you can see not only ponds and sky but also images of flowers and trees reflected on the ponds. There is a small waterfall behind the tsukiyama, and the sound of water flowing in a stream is a part of the view you can command. Stroll along the pond, and stop by the Hyoshintei Tea House, Yoritsuki Tea House, stele of Isuien, watermill, Yagyudo, and small bridge. At each point, you can enjoy a different view of the garden, and you can sense the intention of a designer of this garden to present different views of the same garden.

This structure was transferred to the Isuien Garden by KIYOSUMI Dosei in the 1670's as his secondary house. Guests can enjoy the view of the Front Garden while having a lunch or powdered green tea. 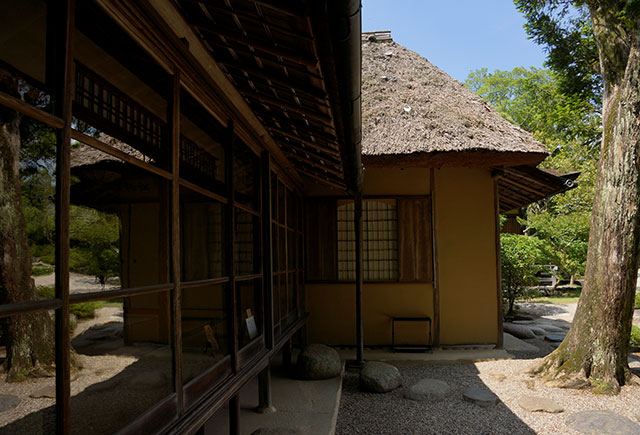 This tea house was built in the early twentyth century, recycling the eighth-century wooden boards originally used in the construction of the Shin-Yakushi-ji Temple. Its interior is in the shoin style or a traditional interior of Japanese reading room since the medieval period. In the early twentieth centuries, this tea house was used for tea ceremonies and gathering for composing poems. You can still enjoy having green tea, viewing the Back Garden. Moreover, looking at the Garden through extremely thin, hand-crafted glass windows gains special sense or taste because this very few of kind of glasses survive in Japan now.

This tea house was designed and built as a copy of the Yuin Tea House, nationally designated important cultural property, and owned and maintained by the Ura-Sen Family. It was erected under the guidance of SEN Yumyosai, the twelfth generation great tea master of the Ura-Sen Family. It is featured by the use of yoji (toothpick) style pillars, which gives you an impression that the interior is more spacious than the reality. 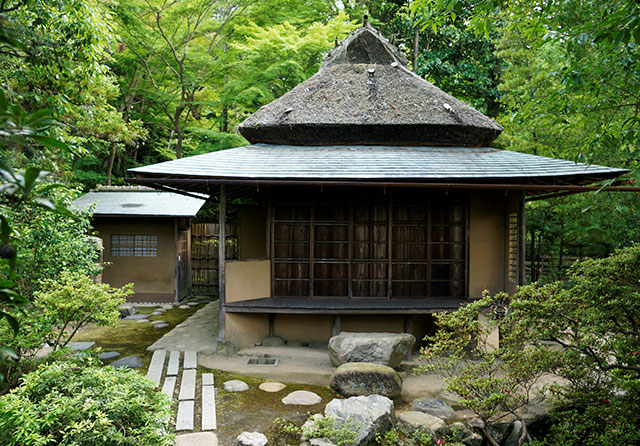 It was originally erected by KIYOSUMI Dosei in the 1670's as a tea house for enjoying Sencha,steeped green tea. It was then re-modelled by SEKI Tojiro in the late nineteenth century, by adding a terrace, in order to use as a wait room for a tea ceremony conducted by the Ura-Sen Family. It is featured by a circular window, rather unusual in Japan.

This structure was transferred to the Isuien Garden from the Hotoku-ji Buddhist Temple in the early twentieth century by SEKI Tojiro. The Hotoku-ji was the family temple of the Yagyu Clan who served for the Tokugawa Shogunate. This structure was about to be torn down, but SEKI purchased it.

Four Seasons of the Isuien Garden

Clicking the button below shows pictures of Isuien the Director has taken thus far.

Here is an aspect of history you can feel now

When the Todai-ji Temple was first built in 752 A.D., there was a pair of the western and eastern seven-story, 100-meter high pagodas. 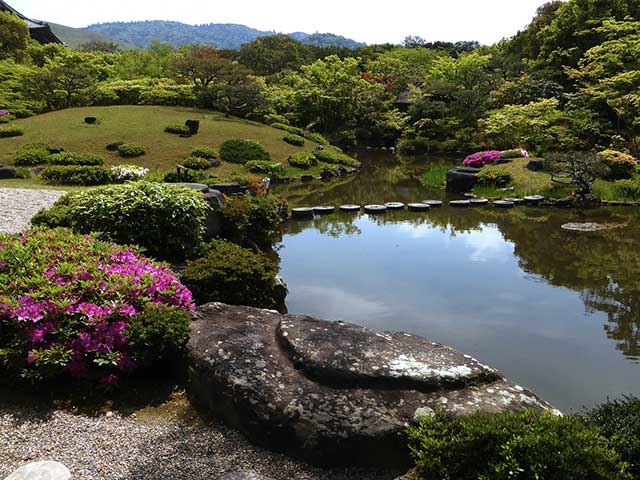 Some of the steppingstones in the garden and in streams have been recycled from old stone mortars for milling. Azalea trees and okame-zasa bamboo grasses growing in the surroundings of these steppingstones are cut regularly so that the Meiji-Era style garden is maintained.

Many abalone shells are placed on thatched roofs of the structures in the Isuien Garden. Practically, this is a protection against crows that damages thatched roofs because thatches are good for their nests and plays. 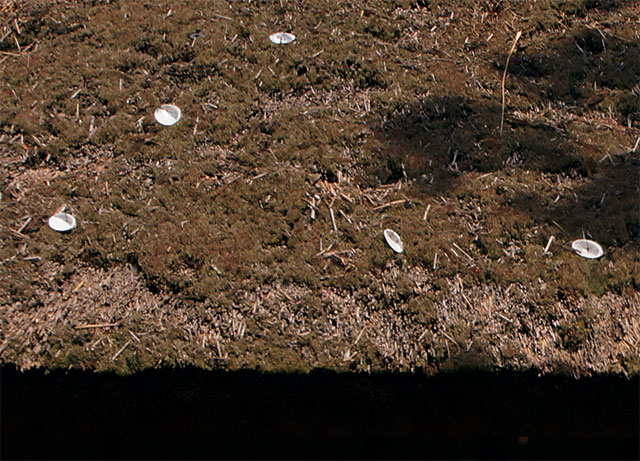 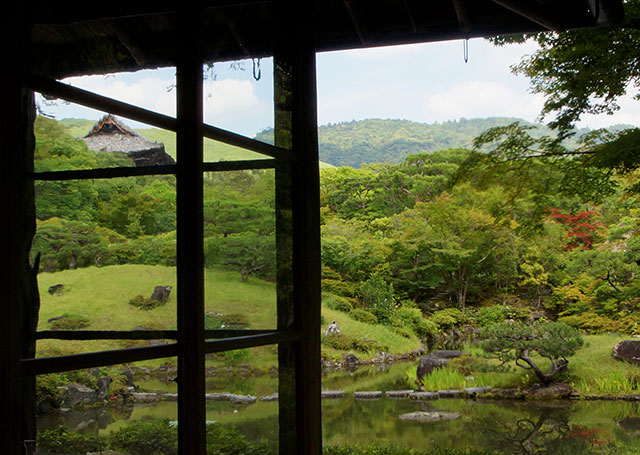